The Top 10 Most Haunted Places in South Carolina 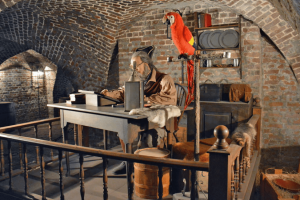 South Carolina is teeming with rich history. It was one of the wealthiest colonies during the Revolutionary War. Thanks in large part to its massive quantities of cotton, South Carolina expanded exponentially.

The Civil War would later take its toll and nearly cripple the state. But South Carolina bounced back and grew into the mighty populace we see today. It didn’t come easy, though. As you’ll see with the following 10 entries, South Carolina’s history has a rather dark side to it.

These locations are thought to be the state’s most haunted. With backstories that will make your skin crawl, you’ll soon learn why success rarely comes easily. To prosper after such a mighty blow, South Carolina had to suffer its share of tragedy.

Today, echoes of those events still linger far and wide. If you should ever choose to visit the state of ‘dum spiro spero’, there’s a good chance you may brush shoulders with one of these haunted locales. 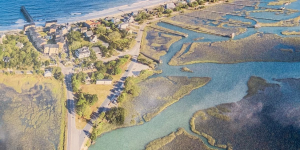 Pawleys Island is home to one of South Carolina’s most haunted beings. To those who live near Pawleys know of this spirit all too well. Known as the Gray Man, this disembodied ghoul is said to have been wandering Pawleys shorelines for nearly two centuries.

But this isn’t the story of your typical haunting. Where most tales tell of evil spirits tormenting the living, the Gray Man chooses to help. It is said that when a bad storm is closing in on Pawleys, the Gray Man will appear as a way to warn locals and tourists.

Beginning of the Gray Man

But how did this come to be? As with most ghost stories, the Gray Man’s is one of tragedy and sorrow. We have to go back to the year 1822. History tells of a young lady who was engaged to be married. She was staying with her family on Pawleys Island, waiting for the return of her beloved fiancé.

Finally, word came that he would be arriving soon. Overcome with joy, the bride-to-be made dinner for her love as she waited for him. Unknown to her at the time, her fiancé had a bad accident while on his horse and died along the way.

When she learned of the terrible news, she was beside herself. One night, the young gal had a horrific nightmare that involved her dearly departed fiancé. The dream was so disturbing that her parents rushed her to see a doctor.

While they were gone, a devastating hurricane destroyed every home on Pawleys Island but theirs. Ever since, the young lady’s fiancé will appear as the Gray Man to warn the living that a hurricane is looming. 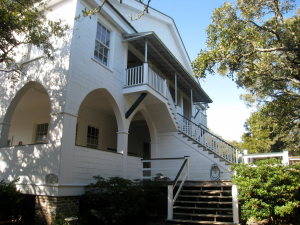 The Pelican Inn is well-known throughout South Carolina as being one of its most haunted locations. Interestingly, the Gray Man is said to linger around the inn, as well. Employees claim to have seen him on more than one occasion.

The Pelican Inn employee’s see a lot more than just him, however. The ghostly apparition of a young female is often sighted here, too. Wearing an old Victorian-style gown, she wanders about the grounds. She never seems to bother anyone; only lingers.

Some think she is the young lady who was engaged to the Gray Man. That she is forever wandering the hotel in search of her love.

There are even two dogs that allegedly haunt the Pelican Inn. These are said to have been owned by the original caretaker. One of the dogs is said to have drowned in the ocean in an attempt to save a young lad. Heartbroken, the other dog soon passed, as well.

These dogs apparently like to frolic around the hotel’s visitors. Neither seem to have evil intent, as they are always seen as playful. 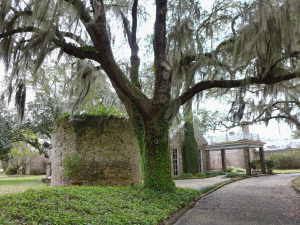 In another tale that involves a friendly spirit, the Litchfield Plantation is haunted by one of its own. Many families have lived on the grounds, but it is the lost spirit of the plantation’s final owner that seems to be forever cursed to stay there.

The Doctor Is In

Dr. Henry Massingberd Tucker frequently wanders throughout the many rooms within the home. But for whatever reason, he is mostly drawn to a room known as the ‘Blue Room’. No one knows the reasoning for this, but perhaps this was Dr. Tucker’s old study or bedroom.

Those who have witnessed his presence say that Dr. Tucker is in no way intimidating. He has never reportedly tried to scare anyone out of the home. In fact, he will often turn lights on for the living, perhaps as a gesture of goodwill.

Other sightings have occurred that involve chambermaids. Who these spirits are remains unknown to this day. But, like Dr. Tucker, they seem to be docile and without malice. 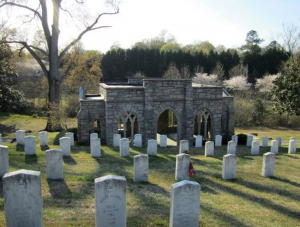 One of South Carolina’s most actively haunted cemeteries, Oakwood is colloquially known as ‘Hell’s Gate’. It is believed that many powerful demons wander the burial grounds. Visitors are often tormented in a variety of ways, mostly electronically.

Visitors’ cell phones will ring without explanation. Upon answering the call, no one will be on the other end – or at least they are choosing not to say anything. Most peculiarly, some calls will be answered only to hear a busy signal. While others are met with a laughing child or demonic whisper.

Guests’ cell phones have also experienced the sudden discharge of their batteries. They will enter with a completely charged battery. But within a few steps, the phone will die and shut down.

Even photographers have witnessed problems with their equipment. Some have tried to record videos only to find upon playback that the tape or file is corrupted. 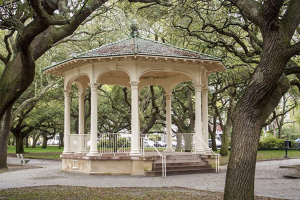 Another well-known haunted location is that of White Point Garden. Centuries ago, pirates would commonly traverse the land while docked at bay. Their behavior often got them in trouble. So much so that nearly 50 of them were hanged from the trees that line the gardens.

Guests of the gardens claim to have met several of these pirates during their stay. Ghostly faces are often seen among the trees, surely a call back to when they were unceremoniously hanged to death.

One of the captains of the pirates is also thought to haunt the grounds. He managed to escape being hanged initially, but was later recaptured and ultimately met the same fate as his sea-faring thugs.

Locals say you can hear disembodied screams around midnight, believed to be those belonging to the pirates of yesteryear. It is also said that if you gaze into the waters of White Point Garden, you will be met with the menacing pirates staring back at you. 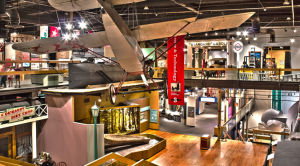 Located in the heart of South Carolina’s capital, Columbia, the State Museum is known by many to be haunted. The South Carolina State Museum was once home to a textile mill, where one of its former workers met a rather gruesome demise.

Lovingly referred to as ‘Bubba’, his spirit entered into the realm of the living when he was decapitated while working in an elevator shaft. From then on, Bubba is said to wander aimlessly throughout the modern-day museum.

He can be seen sporting late 19th century attire as he walks alongside visitors and employees. Some have even shared a ride on the elevator with him. Witnesses say he will get off the elevator and disappear into a wall at the end of a hallway.

This overalls-clad apparition is often spotted up on the fourth floor of the museum. Some people have even claimed to ride the elevator with him. He steps into the elevator, but when he exits, he walks down the hall and disappears into the wall.

In what would surely be a frightening experience, Bubba is sometimes seen only as a pair of disembodied legs and boots. Most of the time, however, he appears as a complete apparition that just wants to ride the elevator. 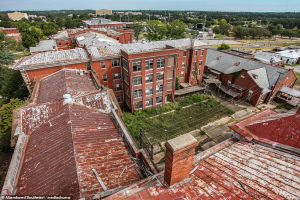 At one time, it was home to a staggering 5,000 individuals. Opening its doors in 1821, the asylum took in anyone with a mental illness. This practice continued until the 1970s, when it finally transitioned to friendlier care for its patients.

The horrific methods used on the mentally ill during its earlier years of operation are nothing short of barbaric. Because of this, it is believed that many spirits haunt the hospital grounds to this day.

Staff and patients have reported inexplicable cold spots throughout the hospital. Sounds of long-discontinued hospital equipment can be heard echoing down hallways. Voices and whispers of despair remind the living of the pain and sorrow that once filled the South Carolina State Hospital. 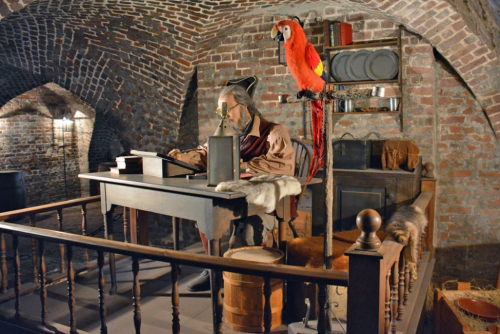 With a name like Old Exchange and Provost Dungeon, one would expect to hear stories of horror and hauntings. Looking into its history, that’s exactly what you find.

Thanks to its ties to the Revolutionary War, the events that took place at Old Exchange serve as the backdrop for the paranormal activity that occurs within.

Built in 1771, this historical landmark was once owned and used by the British during the war. It was here that they would imprison criminals, pirates, and the opposing factions.

Due to the extreme conditions within the prison, many of those locked up eventually died. Today, it is believed that those who passed away inside still wander its corridors. Visitors have heard chains rattling, low whispers, and felt cold spots. 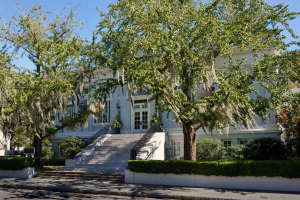 This cultural institution is known by locals to be extremely haunted. Members and guests alike have rubbed shoulders with the long-departed.

One such spirit often parades about the library wearing Victorian-era clothing. Many have been frightened by his appearance, as he will often make his presence known and suddenly vanish.

The library has an old microfilm machine that will inexplicably come on all throughout the day. It looks as if someone is using it, but there’s no sign of life anywhere around it. Books on shelves will move all on their own, as well.

Many interns have been scared out of their wits because of this. Some have quit the very same day that they started. The identity of these ghosts is unknown. But one thing is certain: their presence continues to haunt the living on a near-daily basis. 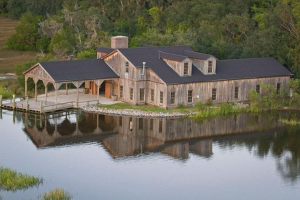 Named after its founder John Boone, the Boone Hall Plantation is perhaps the most haunted of locations in all of South Carolina.

After Boone built the plantation, he sold it to a couple of brothers by the names of Henry and John Horlbeck. These brothers forced slaves to work the fields and brickyard. The Horlbecks’ selfishness had no limits, as they would often make young children labor away, as well.

Because of this, those who visit the plantation’s grounds today often witness ghostly apparitions. Something must have happened near the brickyard’s kiln, because every paranormal sighting ever witnessed has been around this kiln.

Guests report seeing a young girl and boy more than any other. Although sightings of slaves have occurred, as well. These spirits don’t seem to be of the malevolent type, however, as no one has ever reported any such encounters.