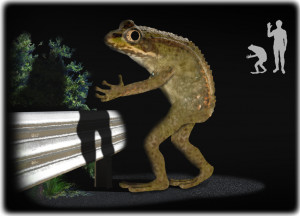 What is the Loveland Frogman?

Imagine Kermit got a taste for bath salts and simply decided to go all Deliverance on his porky paramour? Full banjo crescendo; Miss Piggy running around as if she had just seen the devil; Gonzo with one of those fancy bow and arrows; Fozzy dead on the ground his body ripped to grizzly grit while Animal feast on his entrails… oh the humanity!!! Beaker flipping a chainsaw in the air, dancing in a rainbow shower of blood… my editor just knocked on the door, told me I’m mixing my metaphorical movie moxie and, to quote, “off the tangent, man.”

Anyway, back to the program.

It is a legendary humanoid toad, or frog, that prowls the romantic and oftentimes melancholic nights of Loveland, Ohio. The creature supposedly stands upright at 4 feet. It has been the subject of much debate. Is it real? Is it a frog or a toad? What happened in 1972? Is there a bounty on its head? And, more importantly, to some old-timers, was bathtub moonshine involved in its fertile imaginative offspring?

University of Cincinnati folklore professor Edgar Slotkin compared the Loveland frog to Paul Bunyan. The creature gaining certain notoriety as a folk legend in the same vein as Paul, Old Stormalong, and the chupacabra. Slotkin studied the phenomenon and even graphed the sightings. He noted that the stories have not only been passed down through generations but that most reports of the Loveland Frogman come in predictable cycles.

The legend of the Loveland Frogman can be traced back to the postwar era, to the rocking 50s. Stories started popping out, tales that differed slightly from one another, about a massive frog causing all manner of mischief. Urban legends that seem far-fetched but are incredibly exciting and fun the spread. Like the Mothman, or the Chupacabra, the Loveland Frogman has more or less become an icon of an Era… and Era where UFOs were becoming a thing, pulp Sci-fi movies were hot, and America’s youth was starting to envision what Woodstock and all those psychedelics  might do to their system.

The tales start off more or less the same….

A businessman, or a traveling salesman or a Bible seller is driving all by his lonesome self along a dark unmanned road. Here, the story starts to diverge… 3 distinct retellings.

In one story, the motorist is heading out of the Branch Hill neighborhood when he shines his car’s headlights on the huge figures. The trio erected on their hind legs and just standing in the middle of the road. The man honks his horn. The figures perk up. They twist their necks around. A gasp!!!! All three look at the driver with leathery skin and frog faces.

The other version goes like this: the motorist spots the creatures under the Loveland bridge one of many going over the Little Miami river – he hongs his horn. The creatures shot out from under the bridge, one lands on his hood and croaks… the driver passes out.

Version number 3: same bridge, the motorist pulls over, he gets out of his car and spots the creatures. All three are conversing animatedly. The driver calls out to them. One of the Loveland Frogman gets up, points his finger at his friends in the universal gesture of “put a pin in it,” turns to the bothersome intruder, “can’t you see we’re holding a conversation? How rude,” holds out a wand over its heads, and flicks the Harry Potter approved apparatus… a blazing fire of sparks cannons out of the wand. The motorist flees the scene.

And like those 3 variants, there are thousands more. The motorist becomes a gang of Hell’s Angels. The traveling salesmen is really a college student and his girlfriend out at the makeout point.

On 3 March 1972 at 1:00 am, the Loveland police department goose marched into the madness. Officer Ray Shockey was gliding his car on Riverside Drive near the Totes boot factory and the Little Miami River when a suspicious animal ran across the road in front of his vehicle. He braked his car. Hit the steering wheel and looked on. The animal, now fully illuminated in his patrol car’s headlights, blinked at Shockey… who was having a meltdown true to his last name; Shockey was in shock.

Framed in his car’s lamp stood the legendary Loveland Frogman. Leathery skin, bright eyes, tongue ready to catch a fly the size of a VW beetle. Shockey reported the sighting and stated, “it’s crouched like a frog.” Before he could ask the mutant amphibian if he knew any kung fu and was he related to those funky sewer turtles of New York with a taste for pizza, the creature climbed over the guardrail and jumped into the river.

Two weeks after that wild incident, a second Loveland police officer, Mark Matthews, did Shockey a solid and reported seeing an unidentified animal, similar in height and facets, near the same road.

Matthew, a man that wasn’t known to overthink things, came out of his car guns blazing. He shot the animal right between the eyes and double-tapped it, sicario like, just to be certain the Loveland Frogman was on an express trip to the lilypad up in the sky.

Matthews then dragged the body into his car. The man wanted to show Shockey his catch of the day.

According to Matthews, it was “a large iguana about 3 or 3.5 feet long”, and he didn’t immediately pinpoint the creature’s ID because it was missing its tail… not a freaking Loveland Frogman.

“It either got loose or was released when it grew too large,” Mathews dreaming up a scenario in which the iguana had been someone’s pet that

Mathews showed Shockey the animal… the shocked Shockey confirmed it was what he has seen out there in the dark that day.

Matthews retold the incident to an author of a book about urban legends but stipulated the author “omitted the part that confirmed that the creature was an iguana rather than a Frogman.”

And The Loveland Frogman seems to have a busy schedule. Why? Cause he, she, it has a nasty habit of making the scene in Ohio than most Instagram celebs. He’s everywhere.

Sightings of the Loveland Frogman abound. A great deal of them hoax or kids sampling the frogman’s hallucinogenic siblings.

Sightings of the creature have inspired all manner folktales and urban legends, to the point that old Froggy actually has a yearly festival in his name.

In August 2016, the whole farcical and outlandish chronology of the Loveland Frogman took yet another turn into the land of the whacky. A local Cincinnati TV station reported that “a night of fun turned into a chilling tale of horror.” People glued to the television screen, ready to pop some popcorn and pop a pop for the pop-culture pat-down that was coming their way.

The journalists/news anchor drills on about the harrowing experience two teenagers had just lived through.

Two Pokémon Go enthusiasts were out hunting a Pikachu between Loveland Madeira Road and Lake Isabella when they came upon a real-life monster that did not fit in their pocket.

The kids claim that a giant frog, near the lake, “stood up and walked on its hind legs”.

The real tragedy was that those fancy pokeballs, Nintendo included in their IOS platform, did diddlysquat to the immense amphibian. Nintendo’s trendsetter was unable to catch the Loveland Frogman. Sometimes you simply can’t catch them all, it seems.

In May 2014, the Loveland frog legend was made into a musical, titled Hot Damn! It’s the Loveland Frog! It had decent reviews… Everyone was expecting for Kermit to do a cameo and play his banjo.