HOME » BLOG » HAUNTED STORIES » THE LEGEND OF DR. TROTT’S APOTHECARY AND THE CAPTURED MERMAID
Posted by blogger in Charleston Terrors 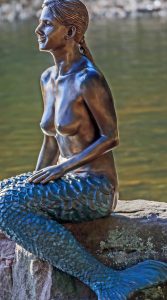 In 1867 in Charleston, South Carolina, the owner of a new apothecary found himself on the wrong end of a rioting group of over 500 people. A storm like a city had never seen was flooding their homes and land, and they determined he was the cause of it. After all, the man had claimed to have a mermaid on display, and mermaids were nature spirits of the highest regard.

The John Lining House was a historic home built in the late 1700s by a local doctor named John Lining as a gift to his wife. The house managed to survive Charleston’s bombardment during the Civil Car, with only significant damage to the building were when the doors blew off.

Once repaired, an apothecary was opened inside. The apothecary was the equivalent of a pharmacy for us–you could purchase remedies and tonics and even have services like blood-letting via leeches done! The apothecary had several owners over the years, but the most infamous one is probably Dr. Trott.

Dr. William G. Trott rented the old John Lining House in Charleston, South Carolina (106 Broad St.) in the spring of 1867. He was sure the apothecary would do well, so he was surprised when he didn’t get a single customer, or even a curious onlooker, for three days!

Confused why he had no customers at this point, he asked his first customer, a woman, where all the locals went for their medicinal needs. It was explained to him by his customer that there was a Gullah root doctor nearby, and people were going to her.

Gullah-Geechee is a distinct culture comprised of West-African slaves and descents (brought here via the slave trade on Sullivan’s Island), living on the sea islands of the Lowcountry of South Carolina (Gullah) and Georgia (Geechee). They have a distinct language, belief system, folk magic brand called Hoodoo, ancestor worship, and rootwork (spells, charms, and herbal medicines).

As slaves, they didn’t get medical treatment. It was ingrained into their culture that they’d have to take their medicines with sacred herbs they could find and grow in their gardens in the slave quarters. Trott could not overturn generations of rootwork and herbal drugs overnight, but he was going to try.

The root doctor was a medicine man or woman and faith healer, and their remedies were much cheaper than the luxurious tonics that Dr.Trott was trying to sell. It was just after the Civil War, and people were struggling–with Reconstruction, with having enough money, with their newfound freedom if you had been a slave.

Inspiration from the FeeJee Mermaid

Trott decided that he needed to do something spectacular to get people to come to his shop. Since he had come down from New York, he immediately thought of the infamous P.T. Barnum (the creator of the first modern circus and the Feejee Mermaid’s hoaxer).

The FeeJee Mermaid was a publicity stunt that P.T. Barnum put on for the New York City Press and Public. When the public finally got their chance to pay to see to mermaid, it was so ugly there were almost riots at the museum! It was the shriveled body of a monkey sew onto a fish’s body–not the Arial we know from Disney!

So, Dr. Trott closed down the shop to gather the materials needed. He placed a sign on the window proclaiming a “Free Magic Show,” with a countdown of 4 days.

Curiosity spread throughout the community; when the shop reopened, there was a line of spectators heading out the door.

Trott had collected glass aquariums and filled them with sand, seashells, seahorses, plants, and other fishes and creatures. He’d spent days catching and collecting plants and animals to fill his tanks, and people were impressed. Aquariums with fish kept in them were uncommon, so this was undoubtedly a unique experience for the people.

But Trott saved the best for last as he ushered people to check out a tank covered in a black cloth. It was a dimly lit tank, and he would only pull back the cover for a few seconds. People would see a tank filled with large fish and murky water, but someone called out that he could see “the mermaid!”

There was a tail hidden amongst the plants, and people scrambled closer for a better look. However, Trott threw the cover back over the tank and told them others were waiting. People spent money in his shop, and he thought it was a harmless little gimmick he could keep up for a while until the locals were used to coming to him.

The root doctor heard the people explaining they had seen the mermaid in the tank, and she went to Trott to clarify that the mermaid was terrible news and something awful was going to happen if he didn’t return it to the ocean.

The Storm That Wouldn’t Stop

The root doctor’s words rang true a few days later; in June 1867, a terrible storm came to Charleston. It rained for four days and nights, flooding the city, the homes, and the people away in the worst rain in 50 years. It was a Category 1 hurricane just sitting over the Charleston area for days, the wind and rain destroying everything.

Mermaids were nature spirits to the African slaves, a holdover belief from their lives in Africa. An angry mermaid could cause shipwrecks, storms, and other watery disasters. They were afraid, and so they marched onto the apothecary to try and convince Dr. Trott to let his prized possession go for the sake of public safety.

A fascinating part of this whole story was that the community leaders could speak to the city council, and Trott was served with official paperwork stating that if he didn’t release the mermaid, he’d deal with a fine and jail time!

The people’s patience gave put when the floodwater killed a young boy trying to save his little dog. A crowd of over 500 Gullahs came to protest the shop when the rains refused to stop. They demanded the mermaid be returned to the ocean so her watery wrath would end. The root doctor said the mermaid had left her only child out in the beach’s inlets. Its crying was causing the storm.

Fed up, the crowd stormed the apothecary at the same time the storm ramped up. Trott came out and explained the entire show was a hoax; there was no mermaid to set free because she didn’t exist. That only fueled speculation that he was lying about the scam so he could keep her!

He invited the people inside to go and see the hoax for themselves. However, once inside, the storm ramped up, and the roof of the apothecary was destroyed. The debris and rain destroyed the glass tanks and cut the people inside. The animals and plants that had been inside the aquariums floated by as the rain flooded out the shop.

A man claimed that he saw the mermaid swimming away from the apothecary and back out to sea. Minutes later, the storm cleared up, and the drenching rainfall finally ended.

Black Activism and the Spin that Followed

The tale is fascinating for many reasons, but what may be more interesting is the political cause and effect here. Here we have a group of black Americans going to their local leaders with a problem, and they were heard. This was just after the Civil War, and the South is still bitter and angry over their loss. Yet, the city was willing to hold Trott accountable for the storm because there were activists about it.

However, newspapers who ran the story have referred to this incident as the “Mermaid Riots,” even though there was no rioting nor property destruction. Mother Nature did the destroying, and the entire city had been on the receiving end of her wrath. The people who are protested the apothecary had been mostly collected and scared but not dangerous. Still, with the newspapers written and read by white readers, it was spun to be a bigger disaster than it had been.

Of course, the Gullah were going to do everything to save the captured mermaid; They had just been freed from slavery two years earlier. It would make sense that they would try to give the mermaid back what she’d lost, her freedom.

Check out more haunted locations, watch a ghost tour from home, or book a ghost tour of Charleston in person at https://charlestonterrors.com