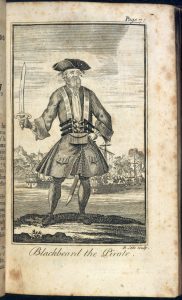 Blackbeard the Pirate.  Was there ever a more infamous pirate that traveled, tortured, and terrorized across the seven seas?  Edward Teach, or alternatively, ‘Edward Thatch” was an English pirate who operated around the area we know as the West Indies or the Caribbean seas. Little is known of his childhood and early life, but historians believe him to have been a sailor on privateer ships during Queen Anne’s war. He became an infamous face of piracy, known for his thick black beard and fearsome appearance. His reign of terror on the high seas only lasted for about two years, ending in a horrific display. On a winter’s day about three centuries ago, Lieutenant Robert Maynard sailed up the James River, returning to Virginia. Villagers questioned if his travels to subdue one of history’s most notorious pirates were successful. These questions were answered shortly when the severed decomposing head of Edward Teach, or Captain Blackbeard, was seen dangling from Maynard’s ship.

No pirate in history has left a legacy of horror quite like Captain Blackbeard. In the two years he spent terrorizing the West Indies as well as America, he built a reputation as the most horrifying pirate the seven seas have ever seen, he definitely deserves the legends and myths that have come from his life. Blackbeard was incredibly dangerous – as well as totally out of his mind.

An Insane, Dangerous Pirate – What’s Not to Love?

Blackbeard’s ship, Queen Anne’s Revenge, was a massive boat of 300 crewmembers. All of them were hard-drinkers, just as Blackbeard was. One can only assume things got too rowdy from time to time – so Blackbeard came up with a pretty messed up way to keep his crew in line… shooting them.

It’s legend that even with his rough exterior, Blackbeard had trouble getting people to listen to him. He decided that acting crazier than his men would allow him the respect and authority he thought he deserved as Captain. One story tells of a time Blackbeard shot his first mate, Israel Hands, in the knees for no reason whatsoever. When Israel asked why he did it, Blackbeard stated “If I don’t shoot one or two crewmen now and then, they’d forget who I am.”

Sailing the seven seas became boring for Blackbeard, however, and when he and his crew weren’t pirating other ships, he came up with ways to pass the time. He led his men into the cargo hold of the vessel and closed every hatch. Then, he lit a pot of sulfur on fire. The burning sulfur filled the hold, choking all the men on board. Crewmembers started to pound on the hatches, begging to be released. Other sailors broke open the doors and freed them crew, but Blackbeard remained in the hold. Once he was the last man standing, he appeared through yellow fog and yelled “Damn ye, ye yellow-bellied sapsuckers, I’m a better man than all ye milksops put together!” It seemed as if Blackbeard had a ridiculously large ego, and very weak self-esteem, which could have contributed to his over-the-top punishments and attacks.

Queen Anne’s Revenge was equipped with 31 large cannons, but Blackbeard didn’t always enjoy using cannonballs when attacking enemy ships. His goal wasn’t to sink the boat but to kill the men on board in order the steal from the cargo. Captain Blackbeard kept canvas totes filled with broken glass, nails, and lead that he would load into his cannons instead. When fired, a huge spray of shrapnel would hit the enemy ship, slicing people and wreaking pure havoc before he boarded. When he was looking to sink a ship though, he would tie two cannonballs together with bolts and a metal rod. When fired, they would spin around, smashing through ship walls with extreme force.

Blackbeard’s Love for Women Stopped at The Shore.

Blackbeard had fourteen wives throughout his time, but he was a strict believer that women were not meant to be at sea. Blackbeard put his crew under strict orders: any woman captured was to be strangled to death and pitched over the side of her ship. It seems as if it’s a dark rule to live by, but the real meaning behind it is a strange form of chivalry, according to reports made by other pirates who followed this same rule. They didn’t believe that it was right to let their crews rape and abuse women, so to spare them the pain and suffering, they would throw them overboard or kill them.

Captain Blackbeard terrorized and pirated for two short years, taking over fifteen ships in the process, although much more may have gone unreported. However, after raiding slave ships and wreaking havoc along coastlines, Lieutenant Robert Maynard, of The British Navy, was the one to finally put a stop to Blackbeard’s reign. He went after Blackbeard with two ships and 60 men. Lt. Maynard decided that a trap was the only way to subdue the wild-eyed pirate, and made it to look as though his vessel was nearly deserted. This lured Blackbeard right into his arms. Once the pirate’s guard was down, Maynard’s men swarmed from the cargo hold, attacking Blackbeard and a few of his crew. Blackbeard was furious, and he charged straight for Maynard, who quickly shot him in the chest. His adrenaline running high, he recovered from this fatal shot and began to swing his sword at Maynard. He thrust his sword with such force that it broke Lieutenant Maynard’s in half, nearly killing him in the process. An unknown party stabbed Blackbeard in the neck from behind, causing an extreme amount of blood loss. Regardless, Blackbeard kept fighting. By the end of the attack, he had been stabbed more than 20 times and shot five. He soon after succumbed to his wounds, dying of blood loss while reloading his gun, determined to continue the fight.

Captain Blackbeard just would not stop. Even in his final breaths, he was ready to continue to fight. He never laid down and surrendered, even when his fate was in view. While the terrors he caused and the lives he took clearly make this pirate one of the scariest and most horrifying, one can only admire his unwavering persistence. Life on the seas with Blackbeard wasn’t for the faint of heart, and only the wildest pirates need to apply.

Today, on Ocracoke Island, near North Carolina, is a small channel of water known as Teach’s Hole. This inlet is reported to be where Blackbeard preferred to anchor his ship to rest. It’s also said this is where he met his end, and many locals say his ghost haunts the spot to this day. After Lieutenant Maynard took off Blackbeard’s head, they threw his headless body overboard, and legend tells that he “swam around the ship three times before sinking below the waters…”

It’s said that Captain Blackbeard chose Teach’s Hole in death because he loved it so much as a restful spot in life.

It’s been said that Blackbeard’s ghost roams Teach’s Hole. Many people have reported a strange light moving beneath the water in this cove, and is said to be the spirit of Blackbeard, swimming endlessly, searching for his missing head. On stormy nights, many believe you can hear him calling out into the wind, “Where’s my head?!”

For more stories about Blackbeard and his pirates, check out this blog

For even more history on Captain Blackbeard and his crew, click here.