History of Charleston and its Hauntings

Charleston is a city that has quite a bit of history. This history doesn’t all end well; in fact, one of the most historical facts about Charleston is that it had an infamous, female serial killer! She is actually one of the ghosts that are said to haunt Charleston.

Her name was Lavania Fisher. Many call her the first female serial killer in the country. She lived in Charleston with her husband and they owned a hotel called the Six Mile Wayfarer House. This was back in the 1800s when hotels and inns were more like rest areas that we have today.

There were soon rumors floating around Charleston about the disappearances of travelers and they were all visitors to Mrs. Fisher’s inn. These concerns were laid to rest because the Fishers were very well-liked in the community and seen as upstanding citizens just trying to make a living in Charleston. Soon, the citizens of Charleston decided to take this into their own hands.

In 1819, a group of Charleston men decided to form a mob and give Mrs. Fisher a visit. When they found the Fishers, they were surprised. There were men in the hotel that told the mob that Lavinia beat them, choked them, and put their heads through windows! These witnesses told the mob even more disturbing tales about Lavinia.

Mrs. Fisher was very kind to the folks that checked in at her inn. She would always inquire about their jobs and what kind of money they made. When she would cook for them, she would give them some tea that had been poisoned. When they went to bed, John would check on them to see if they had died in their sleep. If they were still breathing, he would kill them in their sleep and take all of their money! She was the first woman to be hanged in South Carolina and her ghost still haunts the city today. Speaking of which…

The Ghost Of Lavinia Fisher and Old City Jail

The ghost of Lavinia Fisher is said to haunt the Old City Jail. This jail is one of the most haunted places in Charleston. There were many criminals who lived here such as Fisher, pirates, and murderers. The jail closed in 1939 but did some about 100,000 deaths on site. Needless to say, this jail has quite a dark history.

For the ghost hunters and thrill-seekers who have come to visit the jail, they have heard the voice of Fisher. When Fisher was executed, they asked her for her last words and she said: “tell the devil I’ll be seeing him in a moment.” When ghost hunters asked the voice they heard in the jail, “who will you see in a moment”? The voice answered, very clearly, “the devil.” Her ghost is not the only criminal that is said to haunt Charleston. Along with Lavinia, there were other killers in Charleston and their ghosts like to show up every once in awhile. Pirates are just some of the most popular to haunt the city.

Because it is a port city, Charleston had its fair share of piracy. Some of the most famous pirates in history spent some time in the city. Charles Vane was one of these pirates. He joined up with pirates around 1716 when they were trying to find shipwrecks were silver and gold were said to be. Vane eventually would meet up with Blackbeard and they began to spend more time in Charleston. 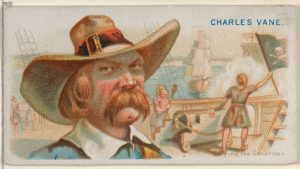 Pirates as a whole seem to haunt a great deal of the East coast, just check out Captain Tony’s famous hanging tree in Key West.

One location near the Pirate House is the Dock Street Theatre. This is another Charleston favorite for ghost hunters. This location had its struggles when it was first built. A fire destroyed it once and then it was replaced as the Planters Hotel. There was an earthquake that nearly destroyed it in 1886 as well. It was renovated and opened up again as the Dock Street Theatre.

Today, the Dock Street Theatre is considered one of the most haunted buildings in Charleston. Passersby have seen ghosts outside of the theatre looking into the windows. They have also seen ghosts looking out of the windows! One famous ghost that lives there is called Nettie. It was believed that she was a prostitute there and she lived in the 1800s. She is seen wearing a red dress and floating around on the second floor! Ghosts hang out all over the city, but many of them still haunt their final resting place.

There is a lot of other hauntings going on in this area, including St. Phillips Episcopal Church and graveyard. This graveyard is very popular for ghost tours and thrill-seekers. The legend says that Sue Howard’s ghost haunts the graveyard. She died in 1888 of unknown circumstances. There have been photos taken of what is said to be her spirit bending over her infant’s grave. This is not the only graveyard that is said to be haunted in Charleston.

The Circular Graveyard is another popular spot for ghost tours. Tour guides have seen pale figures walking through the graveyard at night and then vanishing in the shadows. These figures generally look like Revolutionary War soldiers. Visitors have also heard screaming and moaning sounds in the graveyard. It seems that there are many graveyards with these occurrences. 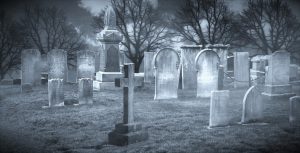 The Unitarian Graveyard is another one of Charleston’s haunted places. Even during the day, it looks creepy! There have been sites of people levitating in the graveyard and many claims that Annabel Lee, of Poe fame, walks around the cemetery haunting people. Perhaps these spirits like to linger closer to their final home, but there are others who linger out in nature.

Haunted Angel Oak and its History

Angel Oak is a favorite tourist spot for those visiting Charleston. This tree is over 500 years old and is about 67 feet tall! The branches of this tree are incredibly long too. They reach about 200 feet. On record, Angel Oak is one of the oldest living organisms in the world. During the day, thousands of people will come to take pictures of it, but at night, the true haunted history of the tree comes to life! 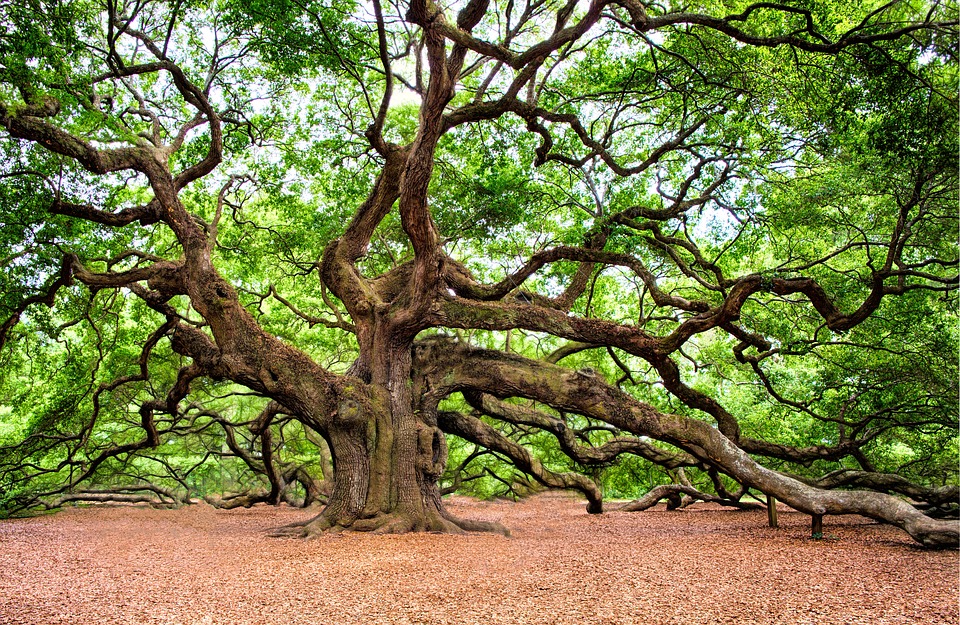 The tree was named for Angel Estate that was owned by Martha Angel and Justus Angel. The hauntings at the tree come from many of the slaves that once lived on the estate. There are many tales that say that vultures would dine on the bodies that were hung on Angel Oak and it is these slaves that haunt the tree and the area around it today. Trees and cemeteries aren’t the only places that are haunted in this area, there are houses and restaurants too.

The Haunting of the Pink House 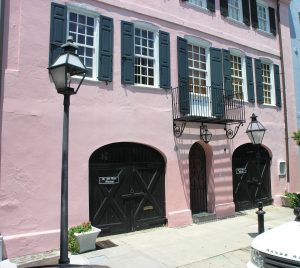 There are two ghosts that are said to haunt the Pink House. They pop up in photos that tourists take and they have been seen by locals wandering the building. She is usually on the third floor and looks as if she is waiting for someone constantly. Many say that she is the ghost of the pirate, Anne Bonny. Bonny was an Irish pirate that sailed to Charleston with her husband and fiancé. Bonny’s life was not very good and she ended up dying in Charleston in 1782. Near the Pink House, visitors will find another good haunt at Poogan’s Porch.

The Haunts at Poogan’s Porch

Poogan’s Porch is a famous restaurant in the French Quarter of Charleston. It is also one of the most haunted places in the city. It was built about 100 years ago and was a Victorian home at that time. The family that lived there had a small dog named Poogan and that is how the name came to be. The restaurant is said to be haunted today and many diners have seen ghostly apparitions here.

One ghost is called Zoe. Zoe lived in the house with her sister Elizabeth before it became an eatery. Zoe was seen wearing a black dress pretty frequently. The sisters never really did anything social and stayed secluded in their home. They were very close, so when Elizabeth died, Zoe was heartbroken. She became depressed and her mental state was declining rapidly. She would walk up and down the street yelling for her sister.

Ghost hunters and diners say that they have seen Zoe walking around Poogan’s Porch. They say that she looks as if she is looking for her sister still. Many diners saw her and thought she was a real person! There have been other paranormal experiences here that the staff members have taken note of. Some things will be moved in the restaurant and plates and glasses break on their own. Historic buildings, just like Poogan’s Porch, are known for the ghosts and spirits that are seen by visitors. Speaking of historic buildings…

One of Charleston’s most popular, historic sites is the Powder Magazine. This is a magazine and museum that attracts a lot of tourists who want to learn more about the history of Charleston. It is the oldest building in Charleston and was used in the American Revolution as a gunpowder store. It has a few haunts of its own though.

Those who have visited the Powder Magazine have seen the ghost of women, pirates, and residents of Charleston. Many say that they have seen Anne Boony and Calico Jack in the building. Visitors have also said that there are shadowy figures that linger outside the magazine as well.

Charleston, South Carolina is a hauntingly beautiful place to visit. With ghost tours, practically all over the city, locals and tourists alike are in for a treat when they visit. Don’t let these ghostly tales scare you and check out these tours to see if you are a true believer.

Check out some of our other ghost tours and hair raising websites, like MiamiHaunts not to mention our interactive fully immersive tour app.