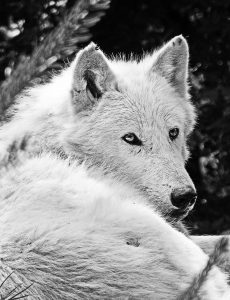 The United States of America may be one country, but there’s a reason it’s known as the melting pot of the world. All sorts of different cultures and beliefs are tucked into every corner, town, swamp, lake, and subdivision of this great country, and with all those cultures comes some fascinating terrors that go bump in the night.

South Carolina has some exciting cultures found there, such as the African-American Gullah Geechee and others. This means that S.C. has some fascinating urban legends hiding among its urban sprawl and swampy islands. This article talks about a few of the creepier tales found in the state. You do not want to run into any of these beings on a moonless night!

Ghost dogs stories are almost as prevalent as vampires when it comes to spectral oddities. In England, they’re called Black Dogs or a Black Shuck. Sir Arthur Conan Doyle was so enamored by the idea of a ghostly hound running rampant out in the Moors that he pitted his creation, Sherlock Holmes, against one in ‘The Hound of the Baskervilles.’

While there are other ghost dog stories in the states, this hound hailing from South Carolina is unique because it appears as a large white dog with red eyes instead of the usual black dog. It’s said to be highly aggressive and territorial. Multiple witnesses over the years have claimed it has either chased, attacked, or lunged at them.

Located outside of Newbury, South Carolina, is Buncombe Road. This rural stretch of asphalt takes travelers through the Sumter National Forest, past an old plantation called Goshen Hill and a desolate church known as the Ebenezer Church.

This roadway is old enough that horse-drawn wagons and carriages rode on it over a century ago. The City of Newbury used to be a thriving center of trade in the south until the beginning of the Civil War in 1860.

The road is now home famous for a different reason; a spectral white dog with a devilish attitude haunts the 5-mile stretch between Newbury and Union counties.

Legend states that the dog was initially the beloved pet of a peddler in the 1850s. A man was murdered in the area as the pair were traveling through. So the locals lynched the peddler and buried him in the Ebenezer Church cemetery ever since the dog spent the rest of his life (and his current afterlife) guarding the churchyard and his master’s last resting place.

The dog haunts the area to this day, and the first sighting of an angry ghost dog was in 1855. Plantation owner Willaim Hardy sent a slave on the back of a mule to gather the local physician, Dr. George Douglass. Hardy told the slave to hurry back because there was an incredibly sick man the doctor needed to help.

On the way, the slave had to ride past the cemetery. He reported that even over the thunder of his mule’s hoofbeats, he could hear a snarling of a monster. Turning around, he spotted a ghost white dog lunging for the mule’s hind legs.

Mule and man were forced to run as fast as possible, but the dog easily kept pace with them! For some undetermined reason, the dog stopped in the middle of the road and vanished.

The story wasn’t taken seriously, considering its source was a scared slave, but soon other reputable sources claimed to have been chased or attacked! Another doctor named Jim Coefield saw the ghost hound on his rounds; his dog was too scared to walk with him in those same areas.

Modern Day Sightings of the Hound

A man named Barry Sanders claims the dog chased him all the way home one day in 1936, snapping at his heels as he ran for his life.

An older woman who lived in the area saw a great white dog around her property until the 1970s. She explained when interviewed that the dog would start as a normal medium-sized dog but then would grow into massive proportions when it attacked her one day. She would hide in her house when she saw it roaming the property.

Despite several witness reports that go until the modern-day, paranormal researchers have not discovered conclusive proof of Goshen’s ghost hound. The legend the dog comes from could be a morality tale, reminding listeners that strangers are still people.

Whether a believer of the legend or not, if you find yourself traveling down Buncombe Road, beware of the great white dog with red eyes and gnashing teeth. Maybe bring some Scooby Snacks to keep the hound from trying to eat you, just in case.

First sighted on November 12, 1949, an odd“man” dressed in a strange silver outfit” crawled into the sewers on the University of South Carolina campus. It was across from the Longstreet Theatre, on the corner of Sumter Street and Green Street at around 10 p.m and sighted by two male students who were out on a walk. The strange man pulled the maintenance hole cover back into place and disappeared underground. Though incredible, the story dried up fairly quickly, many believing it to be a hoax from the students.

Six months later, in April of 1950, a police officer making his rounds discovered mutilated chickens in the same area the strange man in silver was first spotted. Thinking the chickens were from a hazing ritual, the cop investigated the Longstreet Theatre loading area and found the man in silver with more chicken carcasses around him. He had a mutated face with a third eye on his forehead; it was staring at the officer, giving him quite a fright.

Even though he called for backup and was in hysterics when his colleagues arrived, no one believed the police officer’s story. The only evidence of this run-in was the bloody chicken feathers the fiend left behind.

Then in the 1960s, a group of fraternity students were investigating the catacombs under the college campus and claimed to have come across a “crippled man dressed in silver.” Despite appearing injured, the humanoid leaped up at the students armed with a lead pipe. At first, they had thought the man was part of the hazing, but when he tried to attack them, they had to run for their lives!

They reported the incident to the college police department, and though they launched a search for the creature, it had disappeared with no evidence left behind.

The tunnels and catacombs were sealed after the attack in the 1960s. However, sightings continued through the decades, all the way up to the 1990s. Maintenance people have gone on record claiming that they refuse to enter those tunnels unless it’s an absolute emergency!

During the Revolutionary War, General Francis “Swamp Fox” Marion was stationed in South Carolina. He had spies everywhere, including one young woman whose father was a Loyalist Tory. She sent a note to the general that British soldiers had captured several of his soldiers were held at her home of Wedgefield Plantation. She warned him that her family would be visiting a neighboring Plantation, and there would be only one guard watching over the prisoners.

In the dead of night, General Marion arrived and discovered the woman’s information was correct. There was one soldier, a young man, on duty. He was attacked and decapitated by one of Marion’s men so quickly he didn’t even see the sword blade come for him. The prisoners escaped, and that should have been the end of the story–instead, a few nights later, a servant at Wedgefield witnessed a headless soldier staggering up the drive towards the house!

After that, the same young woman heard hoofbeats outside and saw the headless soldier climbing down from his horse before disappearing at the veranda’s edge. Every sense, the headless soldier has been haunting the area. In the 1930s, the Plantation burned down and was replaced by a golf course. Still, the rumors of South Carolina’s Headless Sentry are whispered to this day. (And at Fenwick Hall you can possibly see the state’s own Headless Horseman!)

Check out more haunted locations, watch a ghost tour from home, or book a ghost tour of Charleston in person at http://charlestonterros.com