HOME » BLOG » HAUNTED STORIES » BOO HAGS & HAINT BLUE: VAMPIRES OF THE LOWCOUNTRY & THE PAINT THAT STOPS THEM
Posted by blogger in Charleston Terrors 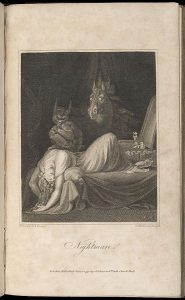 In this article, we’ll be looking into two of the most well-known legends of the Gullah people in South Carolina: the notorious vampiric creature known as the Boo Hag and Haint Blue, the paint color that’s found everywhere in the area. Most people don’t understand how a paint color could stave off evil spirits, but we’re going to learn the history of how the indigo industry changed the lives of hundreds of thousands of West and Central African people.

History of the Gullah Geechee

West-African peoples were bought and brought to the New World in the 1500s for slavery. Brought to Sullivan’s Island in the Lowcountry (the sea islands) of South Carolina, they lived and worked on plantations, farms, paddies, or islands with crops like sugarcane for rum and indigo for its color. To survive this harsh new life, they banded together into communities while living on the islands.

Over the centuries, a new culture was born, with its own language and folklore. The Gullah (of South Carolina) and the Geechee (of Georgia) have a recognized national culture corridor people can explore. There are some widespread legends of the Gullah found all around South Carolina, the most infamous being the Boo Hag. (Click here to read about the Mermaid Riot, another Gullah legend.)

In the Lowcountry, a creature called the Boo Hag is a cross between a sleep paralysis demon and a vampire.

In Gullah-Geechee culture, they believe that people have both a spirit and a soul. Once you die, your soul ascends to Heaven or Hell, depending on the life you lived. Your spirit stays behind to help guide your descendants as part of the ancestor worship that makes up Hoodoo. If you stay but were evil in life, your spirit mutates into a Boo Hag.

A Boo Hag is a creature of the night, a skinless monster with red muscles, prominent blue veins, and eyes that reflect light like a cat’s. Sometimes it’s depicted with flowing white hair, like the hair that “grows” on corpses that led many older generations to believe the vampires were coming from the dead to feed. (Hair and fingernails seem to “grow” on corpses because, as the skin dehydrates, the nails and hair look longer).

They use witchcraft and evil magic to cause havoc on innocent people and will paralysis you in your sleep, like the infamous painting of the demon that sits on your chest in the middle of the night, feeding on your life force and subjecting you to nightmares.

The Boo Hag looks human during the day because it cloaks itself with its previously unlucky victim’s skin. At night, it escapes the skin and goes looking for its next victim. It can slip inside through any crack in a window or a crevice in a wall. Once inside, it finds you sleeping in your bed and crawls on top of you. It sucks the air from your lungs as you sleep, “riding” you until sun-up when it escapes to its hidden skin suit.

That’s why there’s a saying among the Gullah that goes, “Don’t let the hag ride ya!”

If you’re lucky, you might wake up extremely exhausted. A sign of a visit from the Boo Hag is someone who slept all night but got no rest. An unfortunate encounter with the Boo Hag ends with you waking up with the creature still riding you. If you try to escape or attack it while it’s feeding, it will steal your skin for its next disguise!

Few things will keep Boo Hags from riding you at night. You could place a broom near the door to your room because it will be forced to stop and count the bristles. You can even use hairbrushes or a colander to the same effect; it will be forced to count the bristles or the holes in the strainer. The goal is that the Hag be distracted long enough so that the sun comes up and, unable to return to its skin suit, dies in the sunlight.

It’s an interesting parallel to European vampires and faeries, who are also stopped by leaving piles of rice, sand, or salt in their path. They’ll have to count the granules and die in the daylight.

Sprinkling salt over the Boo Hag as it sits on you will make the hag unable to return to its skin and die in the morning. This is the trickiest one of them all to attempt, however. It’s best that, if you wake up, do not move so you might survive the visit.

The absolute best deterrent for this creature and any other angry spirits will include a local hardware store trip. You’ll need a unique hue of indigo blue paint called Haint Blue.

History of the Indigo Plant

In Gullah, the word haint means spirit and usually refers to the more malevolent poltergeists we are familiar with in movies and ghost stories.

When the European colonists came to the New World, they tried many different crops in the colonies to see what they could grow that would represent the best economic bang for their buck. Indigo is a crop that is so labor-intensive to et that beautiful color it was considered “blue gold.”

A Southern Belle named Eliza Lucas in the 1730s planted the first indigo plants on one of her Father’s three plantations in Charleston. While Indigo was grown in both Jamestown, Virginia, and New Amsterdam (currently New York City), it did not grow well in these areas. The Charleston plants were successful in the Lowcountry and became the biggest exploited item from the New World in a few short years.

Since the dye is so labor-intensive, the farmers needed experienced workers; various African cultures worked with this crop for almost half a millennia at that point. The need for indigo cultivators spurned on the kidnapping and enslavement of hundreds of thousands of people from West and Central Africa.

These people banded together to create communities, and their beliefs came with them. Blue is a sacred color to the Gullah Geechee, and it was most helpful in warding off evil spirits. Blue bottles, the glass dyed with indigo, would be placed on the ends of tree branches or sticks to create “bottle trees.” What might seem like a cute garden decoration is another deterrent for spirits. The spirits can slip into the bottles but then can’t escape the tiny openings because of the color. Ringing or rustling from the bottle means a ghost was caught inside.

They used the dregs of the dying vats and mixed the blue with lime and other chemicals to make a robin’s egg blue, which became known as “Haint Blue.” It was so close to the color of both the sky and the sea in the coastal Lowcountry of South Carolina that it became used to keep evil spirits away.

Painting the Haint Blue on windowsills, shutters, doorways, and even the verandas’ ceilings kept the spirits and Boo Hags away. The color would cause confusion, as a ghost would think they had stumbled into a body of water (which they cannot cross) or stepped out into the open sky and would be swept away by the wind or killed by the sun. It was a cheap and relatively easy way to keep away spirits out for blood, bodies, and death.

Haint Blue is a color found at your local hardware store, and it’s common to see it painted onto the ceilings of covered porches of new construction with no one knowing the story behind the hue. It’s believed to bring calm and make spaces feel more extensive than they are. That’s why you sometimes see old houses with bright blue shutters, roofs, and fences; it’s keeping out the evil spirits while allowing the good ones to stay and guide the younger generations.

Still, while waiting on that can of Haint Blue to be mixed up at the local hardware store, you might want to be a broom or two, just to be safe.

Check out more haunted locations, watch a ghost tour from home, or book a ghost tour of Charleston in person at charlestonterrors.com